Not Alexa, one of the founders and current owners but Alexa.com, an Amazon company who tracks internet data and publishes it on websites around the globe. Let's take a look at some of the current information available for Foodspotting.com. Some of it may surprise you.

The first and most obvious thing I wanted to know is....WHO visits Foodspotting the most, WHAT is their make-up? Interestingly enough, based on other websites the audience for Foodspotting.com over indexes on females who are in the age range 25-34, have no children, are college educated and browse this site from work. So in actuality it appears that they may contributing to lost work productivity as the ladies tune in from their desks. Two site members I thought of immediately were Chooky, who may be over 35 and Leslie, a Tampa local prone to potty mouth and some delusions of grandeur but posting some good shots nonetheless. Foodspotting, can you say March Madness syndrome?

Chooky, an Aussie, posts all the time from work and has hundreds of "work" related shots like Vegemite on toast in her portfolio. Always look forward to another shot of a cup of coffee or a piece of toast. 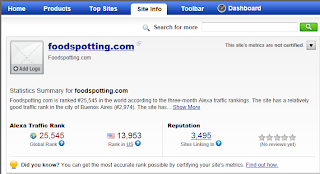 They under index on all other age groups and also men based on internet averages. The rankings on a global basis and in the US were a bit surprising to me. While the numbers fluctuate on any given day or week I believe, they are ranked #25,545 worldwide and #13,953 in the USA. They also have almost 3500 sites that link to them. I do not really know how to assess whether these are good numbers or bad numbers but at anytime there seem to be around 220,000 site members at Foodspotting and again, do not know how active they are but assume the 80/20 rule or somewhere thereabouts.

More fun facts include the site download time of 1.61 seconds and says that 54% of all websites are faster loaders which seems to make sense based on the content rich environment for FS. The current highest rank is in the Phillipines where it is ranked #2907. Almost 30% of site traffic emanates from the USA followed by, wait for it.....India with 8.1%. On another note, Australia is at 2.5%, a number I thought would have been higher.

Currently, site visitors visit 4.4 pages and stay on the site about 3:31 minutes, a number I found to be low but I suppose based on my usage it is low.

There is also an interesting add on at the bottom of the page on Alexa.com called Wayback Machine and it allows you to see how the site has evolved over time. Pretty cool.

I was also surprised to find another site called tastespotting.com which was actually ranked much higher than Foodspotting overall. #17,960 globally, #4157 in the US and has over 7000 sites linking to it. The potential for growth is there for Foodspotting but they need to address site "user friendliness" as the old interface was preferred over the current one and also step up efforts in member response and even enforcement of their TOS, something sorely lacking at this time.

Stay tuned as we discuss the Tampa Cuisine scene in the next installment and show you a new book out there by a local Tampa Foodie, Todd Sturtz!

Gulf Coast Guy
Loving and living life on the Gulf Coast and staying in touch with family scattered about this grand old country.